Episode #228 – ‘Another WMD Caper’ with Ambassador Peter Ford and guests

This week the SUNDAY WIRE broadcasts LIVE as host Patrick Henningsen is joined in-studio by Mike Robinson editor of the UK Column to discuss this week’s top stories from the US, Europe and beyond. In the first hour we’ll be joined by former British Ambassador to Syria, Peter Ford, and speaker at the upcoming Media on Trial event, to discuss the very serious Skripal ‘Novichok’ Poisoning Case and and how the government and mainstream media seem to be mishandling their affairs, and also the media panic over Syria as US-led Coalition’s proxy terrorist fighters lose their grip on East Ghouta and Douma in Damascus. Later in the second hour we’ll cover more of what’s happening with the Skripal Affair and the developing situation in #EastGhouta and Douma where the western mainstream media are pushing out fake reports claiming that Syria and Russia are launching chemical weapons attack in Damascus. Later in the final hour of overdrive, we’ll connect with Sunday Wire roving correspondent for culture & sport, Basil Valentine, who is lamenting about the tragic state of affairs in British politics in the wake the government’s Skripal debacle.. All this and much more. Enjoy the show…

*NOTE: THIS EPISODE MAY CONTAIN STRONG LANGUAGE AND MATURE THEMES*

—> | Episode #228 – ‘Another WMD Caper’ with Ambassador Peter Ford and guests 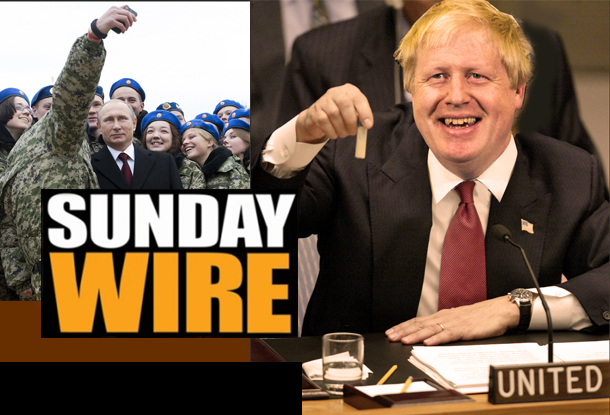 ‹ ›
Tagged with: #Syria, #WW3
Sponsored by Most Liked Tees