New Bipartisan Bill Could Give Any President the Power to Imprison U.S. Citizens in Military Detention Forever

One of the most outrageous acts of Barack Obama’s presidency was his failure to veto the National Defense Authorization Act for fiscal year 2012.

The fiscal year 2012 NDAA included provisions that appeared to both codify and expand a power the executive branch had previously claimed to possess — namely, the power to hold individuals, including U.S. citizens, in military detention indefinitely — based on the Authorization to Use Military Force passed by Congress three days after 9/11.

The New York Times warned that the bill could “give future presidents the authority to throw American citizens into prison for life without charges or a trial.” Not surprisingly, Obama’s decision generated enormous outcry across the political spectrum, from Rep. Ron Paul, R-Texas, on the right to Sen. Bernie Sanders, I-Vt., on the left.

However, the NDAA did provide some weak restraints on the executive branch’s ability to use this power. In theory, the NDAA’s provisions only apply to someone involved with the 9/11 attacks or who “substantially supported al-Qaeda, the Taliban, or associated forces.”

But now, incredibly enough, a bipartisan group of six lawmakers, led by Sens. Bob Corker, R-Tenn., and Tim Kaine, D-Va., is proposing a new AUMF that would greatly expand who the president can place in indefinite military detention, all in the name of restricting presidential power. If the Corker-Kaine bill becomes law as currently written, any president, including Donald Trump, could plausibly claim extraordinarily broad power to order the military to imprison any U.S. citizen, captured in America or not, and hold them without charges essentially forever.

Even opponents of the bill do not believe this is the goal of Corker, Kaine et al. “I think they’re acting in good faith,” says Elizabeth Goitein, co-director of the Liberty & National Security Program at the Brennan Center at New York University Law School. Kaine himself has explained that they authored the bill because “for too long, Congress has given presidents a blank check. We’ve let the 9/11 and Iraq War authorizations get stretched. … Our proposal finally repeals those authorizations and makes Congress do its job by weighing in on where, when, and with who we are at war.”

The post New Bipartisan Bill Could Give Any President the Power to Imprison U.S. Citizens in Military Detention Forever appeared first on The Intercept.

—> | New Bipartisan Bill Could Give Any President the Power to Imprison U.S. Citizens in Military Detention Forever

Source: The Intercept | New Bipartisan Bill Could Give Any President the Power to Imprison U.S. Citizens in Military Detention Forever 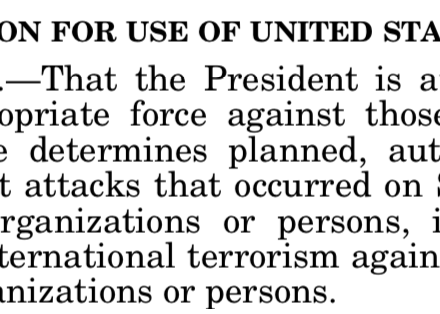 ‹ ›
Tagged with: #unconstitutional, #waronyou
Sponsored by Most Liked Tees